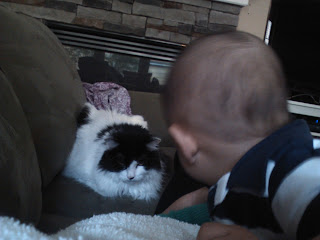 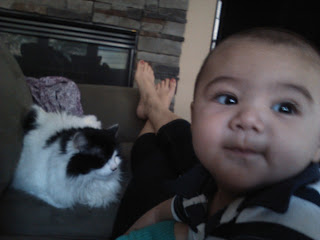 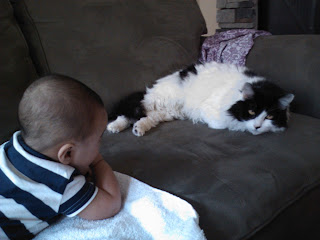 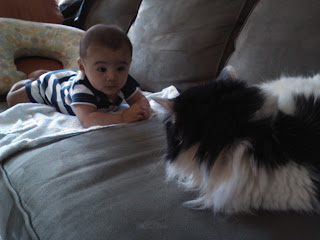 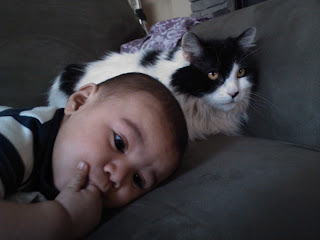 I think she was wary of his new reaching and scooting skills -- he wiggled his way over to her on his belly -- but she can move quite competently on all fours. Owen, not so much. Crawling's not far off, though ...
Posted by Leslie at 3:11 PM No comments:

I suppose it goes without saying

We are emerging from our first four months with Owen, and I have to say, it's been quite a roller coaster in the last 16 weeks. Owen had feeding problems from the very beginning that took the first month of his life to diagnose. Then we started pursuing help for him for much of the second. By the third month, we'd found a sort-of routine, but it involved pumping milk round-the-clock for him. It still does. But fortunately, he's thriving and finally getting to the point where we might be able to get him nursing again with a lot of practice and patience.

Meow Meow's been very tolerant of the changes in our availability, though she's been having a rough time with hairballs in the last month. The poor girl is shedding her winter coat but hasn't had the help we usually give her in grooming it all off, so she's been managing on her own with unfortunate digestive side effects.

Owen was asleep this morning during breakfast, so Meow Meow got a little extra attention. She hopped up on my seat with a hopeful look and then thrust her head under my arm. I knew it had been too long since she'd had proper snuggle time and, of course, mention here.

We're hoping life will be less of a circus in a few weeks -- two more months and Owen can start solid food. For now, we're continuing in survival mode and thankful that everyone in our little family is otherwise hanging in there. 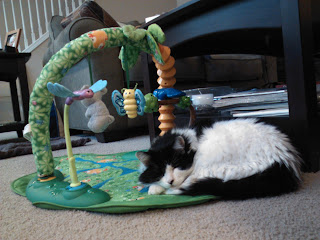 Posted by Leslie at 9:47 AM No comments:

We survived our first month! Owen's been keeping us busy, but Meow Meow has been very understanding. We haven't been keeping her in her suite when we go to bed (since we tend to get back up in a few hours throughout the night), which I think she finds to be an added bonus.

Her favorite place to be is right next to us whenever we're hanging out on the couch. She's been unfazed by Owen's cries and will paw him gently on the back of the head when he's snuggled up in my lap or on my chest. Here's a shot from the wee hours. 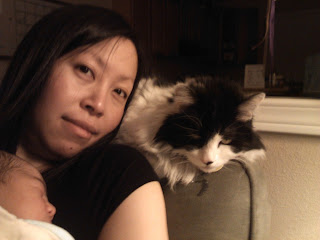 And, for your entertainment, a video of Owen and Meow Meow sharing a lap pillow.

Yes, indeed, we are now two parents and a kitty, plus one! Please welcome Owen, the newest member of our family, who arrived on the last morning of the year of the dragon. At just over 7 pounds, he's smaller than Meow Meow but full of feist.

Meow Meow has given Owen her stamp of approval -- a gentle pawing to the back of the head and then a hearty head-bump -- and is enjoying all the cuddle time she can get in on. Here we are on our second day home. 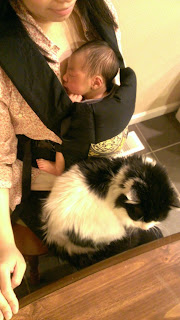 We figured Meow Meow wouldn't have much trouble adjusting to her new sort-of sibling as long as he was willing to share the rights to one of her favorite places. 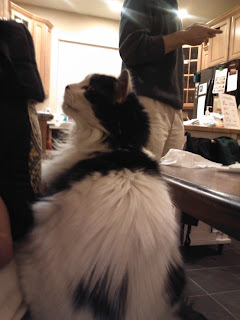 A few more weeks to go?

Happy 2013! Yes, our holiday season flew by -- between Turkey Day, a side trip to Boston for a baby shower thrown by Meow Meow's aunts, and Christmas, we have hardly been home. Which has meant few updates here.

So, what news? Well, Meow Meow, in our absence, has been living it up at her Uncle Dani's, where she got to meet a new kitty. Dani had become so smitten with Meow Meow over the last few years that he decided to get a female companion for his man cat, Shantino (a.k.a., Shanti or Bino). Dani named the new lady of the house Shantina (a.k.a., Bina), hoping that the two would get along as famously as Meow Meow and Bino seemed to.

Of course, that's not quite how it initially went.

Bina is apparently quite territorial and has routed Bino from the indoors. Bino doesn't mind the outside porch and garden in the least, but his food and water are in the house. Unfortunately, Bina gives chase whenever he appears, sending him straight for the cat flap in the window. A squirt bottle to deter her and a pheromone collar to calm her have been only marginally effective.

Meow Meow, though, hasn't seemed to provoke Bina, minus some routine hissing. And that even stopped after Bina saw Meow Meow hanging out with Dani on his bed -- you'd think that would have made her even more inclined to stake her claim to the house, but no such hostilities between the girls ever came to light.

All interesting for us, as Meow Meow's sibling is supposed to arrive in as few as three weeks (possibly even sooner, but we're hoping he'll stay put at least until then), and we're not sure what she'll think of that. I suspect, after her experience with Bina, that Meow Meow just doesn't play the territory game.

But she does protest when she doesn't get lap time. Of late, she's had to adjust to the shape of said lap, but she still fits very easily. See? 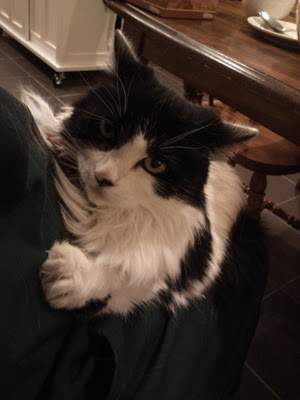 No promises after you-know-who gets here, though ... 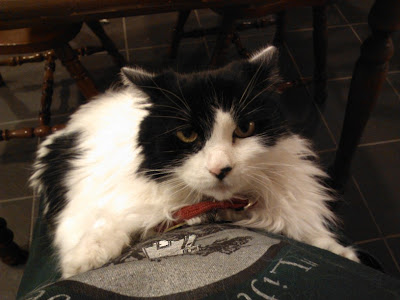 I want them all

Not being able to foster any cats right now is killing me. There are a bunch of kittens at the Seattle Humane Society whom I've been photographing for their local TV appearances, and they are heart-slayers. But given that our foster room was originally Meow Meow's room (now obviously occupied) and our second foster room is now being converted to a room for the baby, we don't have an ideal foster space. And I'm not allowed to do any litter scooping or litter vacuuming or accident cleanup until this baby gets here, which means Dieter would have more janitorial duties than he can reasonably keep up with while working outside of the house.

So all of those darling little ones at the shelter are off-limits for now. Join me in squeeing over them from afar:

(Nope, this isn't the product of clever video magic; the footage, shot by another videographer at the SHS, is playing straight!)
Posted by Leslie at 10:30 AM No comments:

I am NOT your squeaky toy

Meow Meow is a very tolerant kitty. She's always accepted the various cat care operations we've had to perform on her without too much protest -- nail clipping, teeth cleaning, even disinfecting and bandaging her back paws when she rounded a carpeted corner a little too quickly and yanked out almost all of her hind claws such that they bled (it's a long story we'll save for another day). In short, she possesses admirable patience.

Which, occasionally, Dieter takes advantage of for his own entertainment.

While Meow Meow will roll onto her side with abandon to accept belly rubs, she hates being put on her back. Here's what happened when Dieter, in a moment of mischief, decided to find out how long it would take for her to get out of such a predicament in her favorite place, a nice warm lap:

Posted by Leslie at 4:37 PM No comments: